Most conventional rock mechanics tests have their origin in civil engineering, where design rules necessarily dictate a conservative approach. For the petroleum industry applications however, partial rock failure may be acceptable in order to optimize design. If such approaches are to be adopted in a manner other than purely empirically then the method of stability analysis must fully account for the failure behaviour of intact rock; i.e. the transition from peak to residual strength including the change in friction, dilatancy and cohesion characteristics and not least, the role of the intermediate principal stress. A number of polyaxial tests have been carried out on Saltwash North and Castlegate outcrop sandstone, and compared to results from conventional triaxial tests. The test results have been back analyzed using the ISAMGEO FE code. The results of the study confirm that the intermediate principal stress does have an impact on rock failure and that this is not adequately captured by the standard Mohr-Coulomb criterion. In response a modified Mohr-Coulomb criterion is established. Furthermore, using a simple example of openhole stability, the study demonstrates that the results of numerical modeling are sensitive to the method adopted during model calibration in addition to accounting for the intermediate principal stress and post-peak strength strain softening. These effects will have a critical impact on engineering design if this is to include partial rock failure. 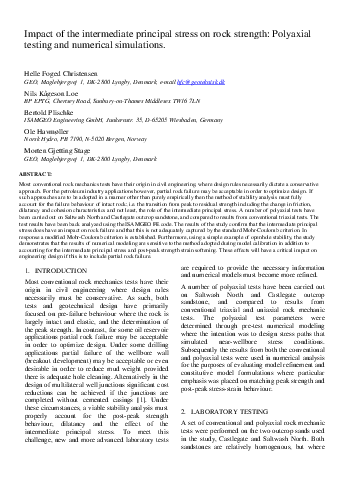